A Recent Run through Argentina

Consciously grabbing the gearshift while simultaneously pressing the clutch, I couldn’t help but grin. Despite the fact that I got chewed out and fined on the Brazilian border and was denied entry into Brazil and Paraguay 24 hours later, life was still good. What’s the point in faulting people who were only doing their job? At least I had a feasible option of getting back into Paraguay. With the border being denied me and the Paraguay-Argentina ferry closed, I had to drive south, through Argentina for about 5 hours and then back north another 5 hours. Some might call this insane, others might have pitied me in my “plight” but I relished it. So, for some reflections.

Okay, so getting home at 0200 Sunday morning was a bummer but that’s life sometimes. Staying awake was no problem either. It helped that I was able to understand most of the message instead of sitting there like a bump on a log. But I still maintain, life is good. And someday, I’m going back to Argentina.

This is a follow up post to “The Pain of a Lost Nail“. These pictures are not asethetially pleasing nor arty. Only documentary

Looks like a pretzel rod dipped in strawberry syrup. 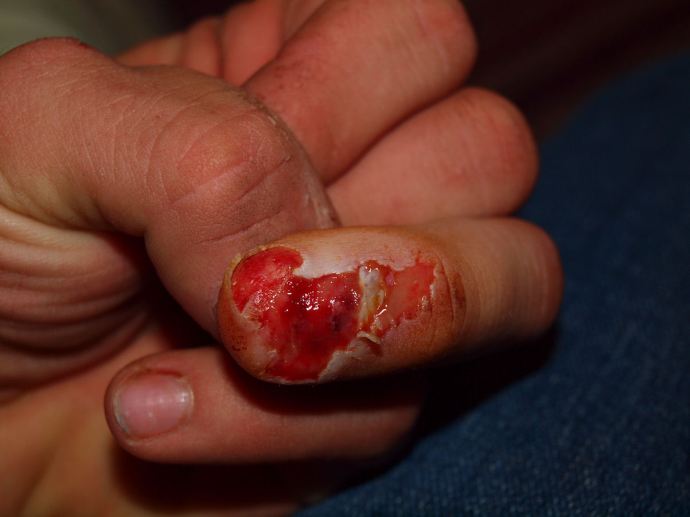 The last one was blurry. This one is crystal clear. Surprisingly, I didn’t have any significant amounts of pain throughout the entire ordeal. It’ll be a good year till it looks remotely normal.

…and trust me, my tastes haven’t improved. But I digress

One fine day, as the northern winds began to blow warmth over the land of the Paraguayan Pilgrim’s sojourn, he did take a journey to the lands of the east. Indeed, there were 2 motives which guided him. The primary was in accordance with his duties and involved the returning to a location, which hath since become very familiar to him. The details of this include steel birds, slips of paper, and the flight of friends from our beloved land. But, for the Paraguayan Pilgrim, the second portion of the trip held greater interest. For lo, in his wanderings, he, along with Companero J, did espy the clashing of 2 colors of material, fighting for supremacy amidst the bland and boring colors of the local material heaven. Indeed, let us not confuse this with the common vernacular of “seventh heaven”. In this heaven, there be but twain levels. Twas on the second that the Paraguayan Pilgrim and Companero J observed these 2 shades of fabric, literally, fighting and screaming for attention, and yet dwelling in a relative state of complimentary peace. (Indeed, twas reminiscent of state in which siblings do dwell) They, possessing a quick and imaginative minds, devised a scheme to utilize these twain in their full glory and shocking state of clash. Acting nonchalantly and being cautious not to be observed scheming, they henceforth made plans to retrieve portions of these materials for personal use.

And in this frame of mind, did the Paraguayan Pilgrim return, seeking, of all odd things, material. Indeed, amongst the various sales associates, several found this amusing. For did he not have with him two of his fellow companions who would be more known for their prolific material consumption? And did these not remain within the confines of the chariot by specific request? But in this day and age, there is a general lack of wholesome amusement and if in this manner, people can be blessed, then so be it.

The end of this parable hath been attained.

The Pain of a lost nail

It came to pass in his wanderings in a land down under, that the Paraguayan Pilgrim did rack his mind for suitable material for his next blog. He was unaware of the events that were to transpire, the following of which shall be told here.

Again, in those days, it came to pass on one of the many holidays, which occur in the land of his pilgrimage, that the Paraguayan Pilgrim was notified by Maynard the First that his assistance was required in erecting long pieces of dead trees, from which the world would be notified as to what kind of place they had arrived at. There was a need for twain of such pieces. Having received said notice, he finished his inspection of a faulty light emission device and journeyed to the commanded place. Arriving, he soon found that this meant, what’s commonly called, “work”. The day being a holiday, he was ill-disposed to overexert himself. But, what was commanded shall be done or attempted till there is no more attempting. Of the twain, the first sign post, for verily that is what it was, allowed itself to be manhandled into the place provided for it. But the exertion had taken a toll on Maynard the First and he commanded that additional warm bodies should be procured for the raising of the last and final post. (In all truth, these should be called logs. They resembled the torture logs used by some U.S Special Forces in training.) Twas in this manner that Companero J came to help. Equipped with a red, 4 wheeled off road chariot, the brilliantly devised plan had the three tying a rope to the top end and using the tractor to alleviate the weight and assist in the raising of said log. After some initial struggles, the threesome decided to reattempt and try from a different angle. But this required rolling and shifting the log into the desired place. And so, with the Paraguayan Pilgrim on one end and Companero J on the other, they proceeded moving it into the desired location. In the process, they moved other parts as well. But that is advancing the story.

After having living over 20 years, the Paraguayan Pilgrim found himself suddenly needing a new part. For, as he reached under to regain his handhold in this moving process, Companero J moved his end, causing a shifting of the post. In the process, the Paraguayan Pilgrim found himself lacking a finger nail, over a layer and a square inch of skin, not to mention blood loss and profitable work time, as well as the indented remains of the aforementioned finger nail. Fortunately, he works at a clinic and the necessary medical attention was on hand. Whilst others gathered and exclaimed over the damage, he bethought it rather interesting that such harm could be done and pain seem so remote. But it was a grievance to his mind to know that others were working and he couldn’t participate. In this fashion, as soon as the nurse finished attending him, he bounded out, in search of being a help. Alas and alack! The labor was virtually accomplished and given that his bandage prevented from bending his one finger, therebyy rendering one hand almost useless, he was relegated to being a bystander.

Thus ends this account. I’ve been advised to go on pain medicine but so far it hasn’t been necessary. I only need to keep it periodically dressed. I find it quite fascinating and wonder how my body will heal it’s wounded member. It’ll never be the same but I still find it interesting.

All was deathly still. Save for the quick and hurried actions by the midwives who were using all their skill and training, no one moved. Wrapped in our own worlds, we pondered life and the inevitability of death. Some of us were praying, silently and from our hearts, that God would spare the life of His dear little child. But as time went on, we all sensed that our earthly will and desires would have to ultimately conform to heaven’s glory. When the midwife came out and broke the news, it really was no surprise. Even in the States, there would have been no guarantee of prolonging a life that started as this little girl’s had. But the announcement still came as a blow. On the one side, que lastima that the family will not have the privilege of watching her grow up, will not enjoy hearing her childish voice ring with laughter at the delight of discovering her world. But on the reverse side, one could almost be envious of her being in heaven. Having lived only 20 hours, all she knew was pain and suffering. The knowledge that heaven is now her home but it’s still hard to accept.

In the middle of all this, came a voice from the kitchen. A voice filled with excitement and childish innocence. “Isaiah, Isaiah“. Little 4 year old Phoebe walks out of the door to her little brother, who was being held by his mom. Cradling a bowl of popcorn in the crook of her left arm, she scoops up a spoonful and begins eating it. The contrast was almost heartbreaking to witness. Her lack of situational knowledge was almost cheerily refreshing. She still hasn’t experienced death in a real way. Afterward, she was full of one question…”Why?“…as her parents tried to explain to her what had happened.

It’s at these times that one could question God. But that only brings stress. Rather, the logical choice is to trust God. Trust that He knows what He is doing and to walk in faith. He alone can comfort; He alone can bring peace. Anything else from anywhere else is a false imitation.

The funeral is at 11 o’clock AM today.

I think I saved the best of the recent photos for last. I love this shot! The glare on the rail fails a little but on this trip, anything metal had that “wet” sheens.

One nice thing about sub-tropical countries…a almost continualy supply of fresh fruit. Right now, it’s raspberries out of the patch and oranges so sweet, you smile involuntarily when you bite into them! Sorry, no pictures of the latter but I thought these were good enough to share. Just don’t drool over your keyboard! 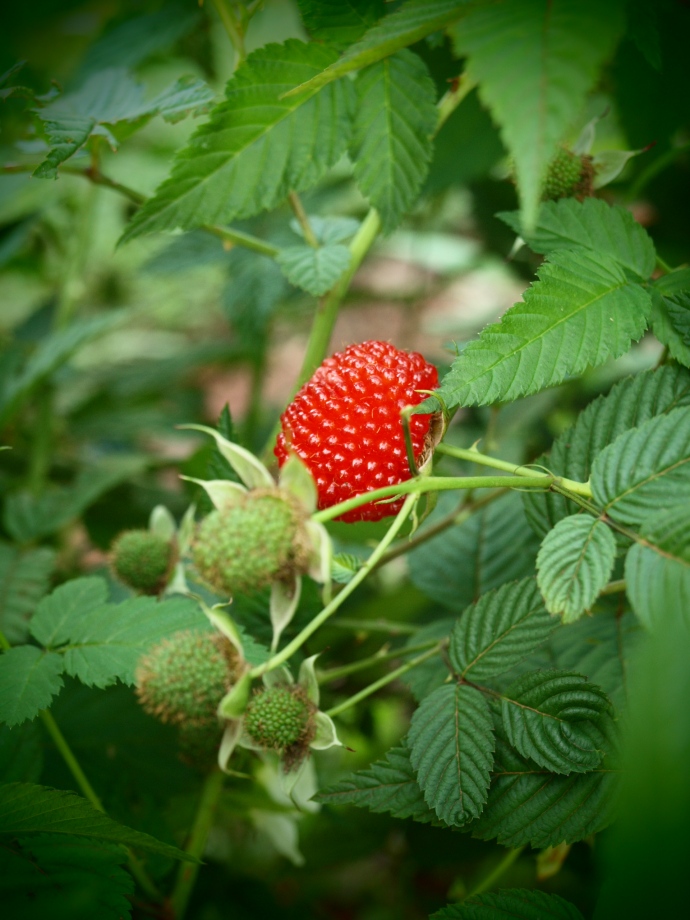 Ahh, from out of the thorny brambles comes this sweet, luscious jewel, which (did) will delight the tastebuds and send them into ecstasy. 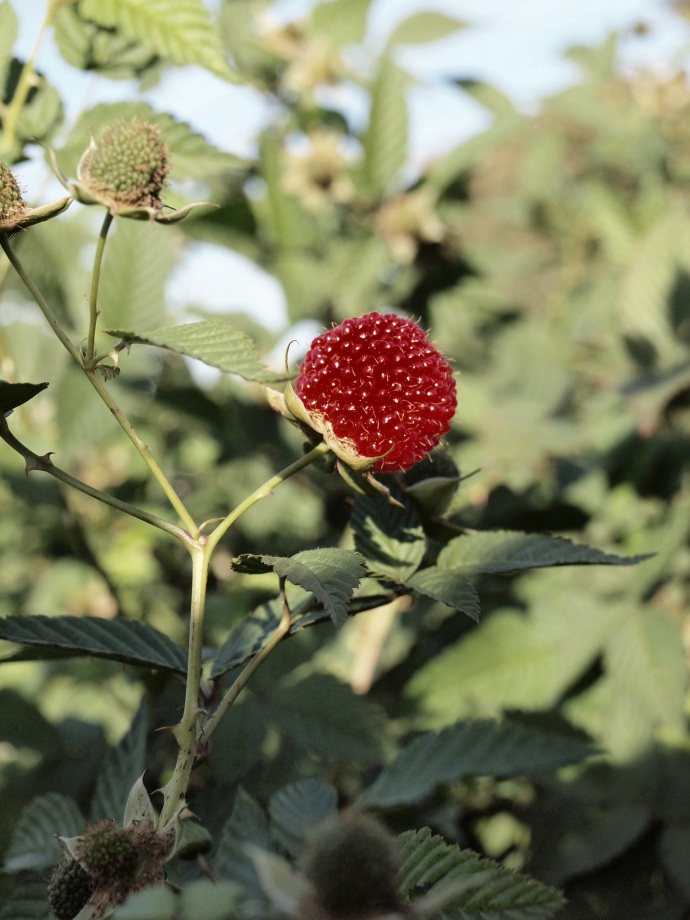 Basking in the glow of a afternoon sun, waiting to be plucked, and just right for shooting.

You know how you can see something but there are times when you see it in a different way? Here are two shots from the falls. This past time, there were not a lot of people there and they, the walkways that is, took on a different look. 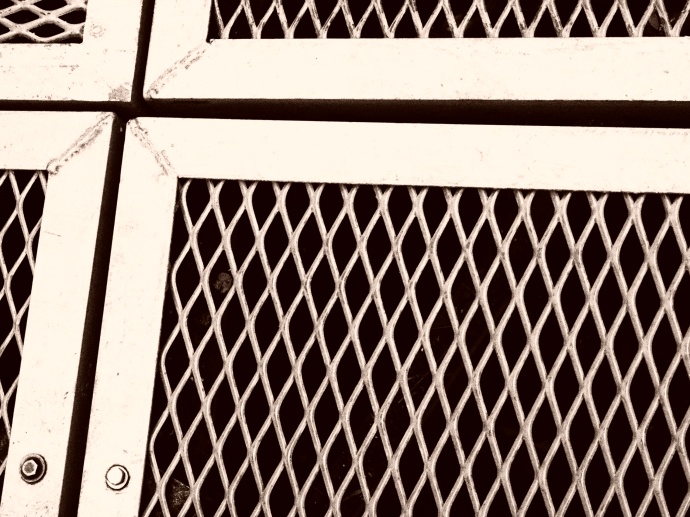